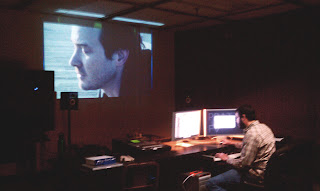 A.D.R. - Automated Dialog Replacement, except that there's nothing automated about it. An actor stands in a sterile booth with a microphone trying to recreate their performance so we can replace the audio that is hard to hear because the director decided that shooting along a noisy intersection was a good idea.

Spent six hours Friday night replacing a handful of lines. The first two were spent just getting the room in working order.

Tip #3,432: when going into a post-production space, A) never assume that it will be set up and in working order, and B) it will take more time than you think to set it up and get it into working order.

R gave the most amazing ADR performance I've ever seen. Not only did she nail almost every line perfectly on the first take, she copied her performance exactly even though it's been almost a year and half since we shot her scenes.

It could've been a tedious night but M kept it fun. As a producer, he is especially skilled at finding the right people for the job. As a performer, he excels at making sure everyone is having a good time.

However, the Hero Award goes to Dancing Mike, a professional ADR expert who has worked for Spielberg and the Cohen Bros., among many others. Watching him work the console was like watching a great composer at work - you're not sure why he's contorting his body a certain way but you're glad for the results. I am so thrilled that he's mixing our film.

Trenkamp
Trying to turn a sinister urge into popular entertainment.